Fish is evolved from the first vertebrates on the planet since the middle Cambrian period, about 530 million years ago. Fish has been consumed as food by human beings for its nutrition and existing largely in the sea since ancient times. Today, fish’s production still keeps in a large volume. It is reported that the global total fish production in 2014 is 167.2 million tonnes. Fish production includes capture fishery and aquaculture, the capture fishery takes a large part of producing 93.4 million tonnes fish, of which 81.5 million tonnes from marine waters and 11.9 million tonnes from inland waters. The top 4 major producers are China, Indonesia, the United States of America and the Russian Federation.

On the other hand, fish is highly perishable which needs proper handling and preservation if it is to have a long shelf life and retain a desirable quality and nutritional value. Fish preservation mainly includes drying, salting, pickling, smoking, freezing and canning. Among these, drying is a traditional and simple method in processing fish. 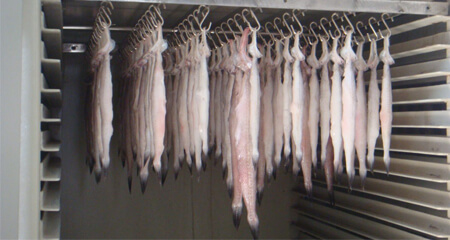 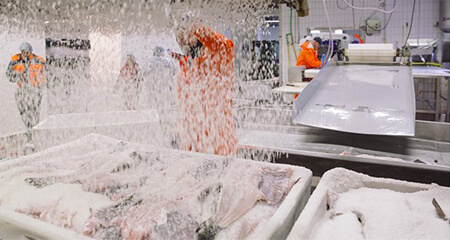 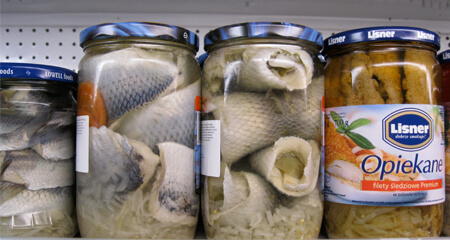 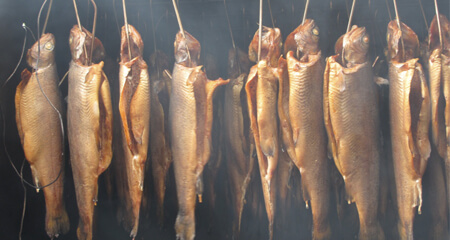 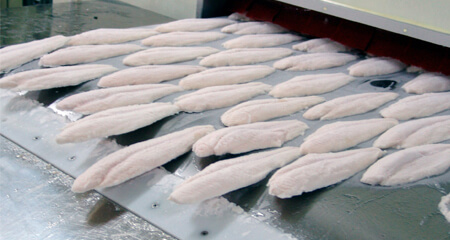 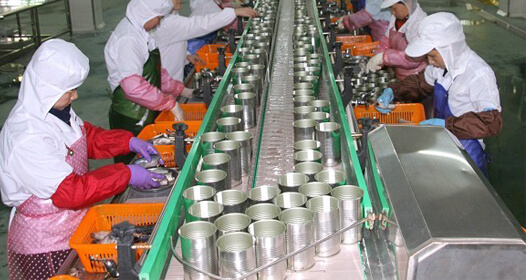 Drying can keep fish’s original nutrition, dried fish is a completely natural product that retains the protein, antioxidant and omega-3 fatty acids benefits of the fresh fish, which helps to reduce the occurrence of heart attacks and keeps the body’s circulation functioning well. And fish dehydration inhibits microbial growth and slows enzymatic process which is responsible for fish spoilage, and dehydrating produces a concentrated form of fish. All these resulting in long-time storage and convenient transportation.
In fish drying processing, there are two drying forms including the traditional way and industrial way.
1. The traditional way of fish drying is sun drying, however, it’s limited by weather, in adverse weather, it takes a long time for drying. An outdoor environment maybe unclean, it will influence product price and demand in the market.
2. The modern method especially the hot air circulation dryer, which takes large importance in today’s fish drying, is used in industries for its well-designed sealed circulation system and automatic temperature control function.

The hot air drying superiorities are as follows:

♦ Fast and efficient drying due to hot air circulation: the interior of fish can be directly dried with fast raising temperature. And high dried fish quality can be achieved.
♦ Controllable drying: by hot air drying, you can regulate drying speed so as to keep different types of fishes in a suitable drying situation.
♦ Machines adopting hot air drying technology are generally designed with small scale, medium scale and large scale, which is suitable on for different scales of drying business to meet customers’ specific demands. 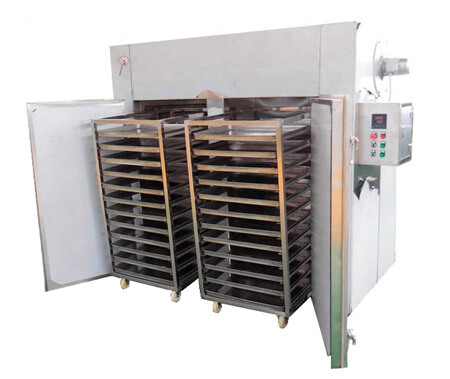 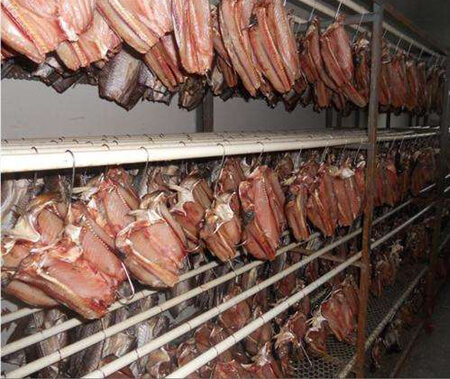 Ⅲ. How To Dry Fish by Hot-Air Circulation Drying Oven

A complete industry process of drying fish always starts by scaling and cleaning, the fish scale has to be removed before serving, fish scaling machine can replace tedious manual work from now on.
After descaling, fish is sent to be cut, if customers need different shapes, a fish cutting machine can help reach the aims. 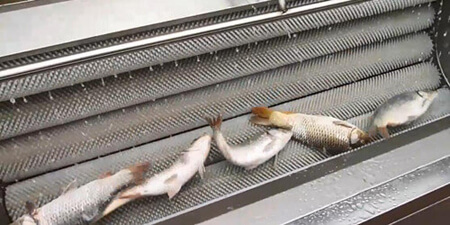 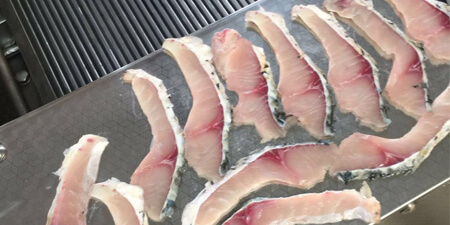 Then, the fish can be dried uniformly by a hot air dryer. The hot-air drying oven is mainly equipped with a fan, heat source, drying chamber and the trays. When drying, the fan blows the air to a heat source which is usually supplied by electricity. In the oven, the fish won’t be overheated or under heated with an automatic temperature control system. After heating, the hot air goes through the trays and dry the fish. Furthermore, the trays provide a dispersed space so fish can be evenly dried in the hot air, resulting in a uniform color of products. After that, the air temperature reduces and it is sent again to the heat source by a fan for next circulation. In the chamber appears the convection making most of the air recycled so the drying oven is cost-effective.
Finally, the dried fish will be vacuum-packed by vacuum packing machine for storing and selling.
Notice that one tray can hold 6-8 kg fish, and the tray numbers depend on the customer’s processing scale.

The fish consumed as food in 2014 is 146 million tonnes worldwide, it accounts for about 87% of the fish production, in which 17 million tonnes are in dried, smoked or other cured forms, about 44 million tonnes are in frozen form. Generally, the frozen fish trade is more manageable for the bulk buying, distribution, and marketing of fish, while dried fish can often be processed by the same individual such as the small-time fisherman, transporter and wholesaler.

In Africa, a large quantity of fish is dried and exported to worldwide like Europe and America. For a richer flavor, the dried fish can be smoking with a smoking oven and tastes nice. The major exporting countries are Nigeria, Ghana, the Ivory Coast, Senegal, and Cameroon.
Let’s take Nigeria for example. Nigeria alone exports more than 5 tonnes of dried and smoked fish per month (via airfreight).
● In the domestic market, most housewives and restaurants in Nigeria use dried fish like catfish to enrich and enhance the taste of soups and food. In Nigeria, the dried fish is sold directly in the local market such as the catfish or in a vacuum package in the chain supermarket.
● In the international market, the huge trade in dried fish is a consequence of the growing demand by the increasing number of Africans living in the diaspora, according to the UN population estimate, there are 20 million Nigerians living abroad and majority resides in the UK and the USA. This large number of Nigerians living abroad has brought about an increase in Nigerian food internationally. This creates opportunities for exporters who export dried fish to the developed countries.

EU is a net importer of fish products. Spain, France, Italy, Germany, and the Netherlands are the largest importers, In 2016, the revenue from “Canned, Dried and Smoked Fish” segment amounts to US$28,797 million. The average per capital consumption of dried fish in the EU is around 4.6 kg per year.

In the US, the private label products have a moderate influence in the fish market compared with other categories, the level of influence is around 30% in all but dried fish where it is closer to 65%. Besides, 27% of the fish consumers are older, which makes up almost 30% of the US population. Therefore, the market for the younger generations is potential and the products’ function can be more diversified so it won’t be beaten by private label products.

In the future, consumers will be seeking more “healthy”, “clean” and non-GMO foods, which definitely benefits the fish industry.

The dried fish like salmon, mackerel, sardines, and albacore tuna are good sources of omega-3 fatty acids. These are “good” fats that help keep your heart healthy. They may also help keep your brain sharp, the trend of consuming fish oil increases especially as people get older. Generally, the fish oil processing steps are: cooking→pressing→drying with the pressed solids & separating with the liquids→polishing→storing.

2. Drying segments grow faster than other forms of fish processing

Dried fish, together with dried shrimps and octopus, are gaining popularity in many developed regions, which is usually seen in supermarkets and the local markets. Because of easy preservation and high nutrition, dried fish catches more eyes in the future. Hot-air drying oven with compact structure, fast drying and high drying efficiency can bring long-term benefits to customers. If you like fish drying business, our company can provide processing equipment and solutions.