Ginger is a perennial creeping plant, with thick tuberous rhizome, producing an erect stem 30-100cm tall. It is propagated from rhizome cuttings, planted on rich, well-drained loam. The top 5 ginger producing countries in the world are India, China, Nepal, Nigeria, and Thailand. India, with a production of 7.03billion MT, leads in the world ginger cultivation. The following two countries are China and Nepal, with the production of 4.25 billion MT and 2.55 billion MT, respectively.
The primary known constituents of ginger root include starch, gingerols, zingibain, oleoresins, essential oil, mucilage, and protein. The dried form of ginger, ginger powder, is used as a spice. And its extracts, ginger oil, are used in beverages and confectionery.

I. Advantages of Ginger Dehydration 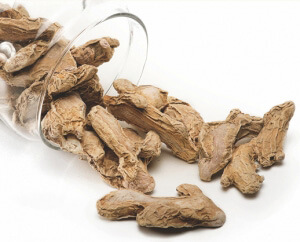 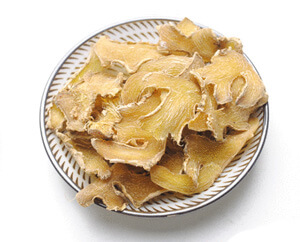 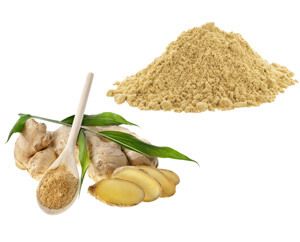 Dried ginger is more concentrated in its chemical composition than fresh ginger. Dried ginger can be stored easily for a long time, the process is, therefore, effective because it lowers the cost of packaging, storing and transportation by reducing both weight and volume of the final product.

Dried gingers can be processed into different forms like piece, powder, starch, and all of these forms can be applied in many industries.
♦Dried ginger pieces not only have the function of expelling interior cold and dampness but also reduces the bitter feeling when your mouth becomes dried. So it is a common ingredient of cold pills.
♦Ginger powder is normally used in seasoning and pickling vegetables, baking food, flavoring candies, or a beverage such as ginger tea.
♦Dried ginger powder can be further processed into starch, which is isolated from ginger rhizomes. The increased requirements for starches in different applications, such as functional and healthier food, or applications in pharmaceuticals have thus forced a steady development of new starch types.
♦Dried ginger slice can also be steam distilled as ginger oil or eleoresin, which have the function of anti-oxidation and anti-bacterial. The yield of oil from dried ginger rhizomes is between 1.5% to 3.0%. The remaining rhizome powder contains about 50% starch and can be used for animal feed.

During drying processing, the fresh gingers are normally processed using Hot-Air Circulation Dryer, which is a tray dryer whose heating source can be supplied by electricity, steam, hot water or far infrared ray, the hot air is blown into the drying oven by the fan and most of the hot air circulate continuously in the drying oven, drying gingers with this system is a cost-effective long-term food storage solution. After drying for several hours, store it in plastic zip lock bags or airtight containers. This dry fresh ginger will store in a moisture free environment for more than a year.

Besides hot air drying, another drying technology-microwave drying is usually applied in drying processing. Microwaves are a form of electromagnetic energy with frequencies between 300MHz and 300GHz, generated by magnetrons under the combined force of an electric and a magnetic field perpendicular to each other. For more information about microwave drying, you can visit our microwave food drying machine.

The ginger drying steps basically are: sorting→cleaning→slicing→blanching→drying→packing, which is suitable for both home and commercial use. 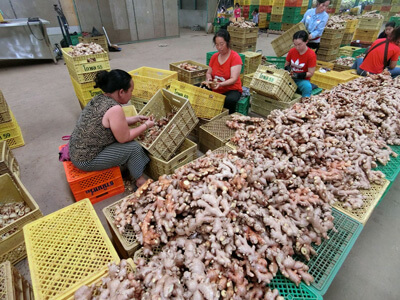 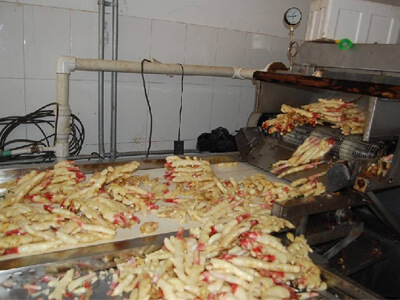 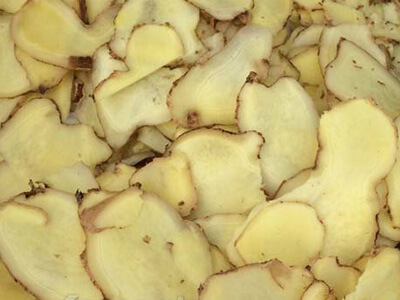 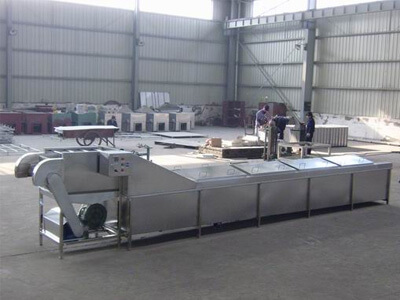 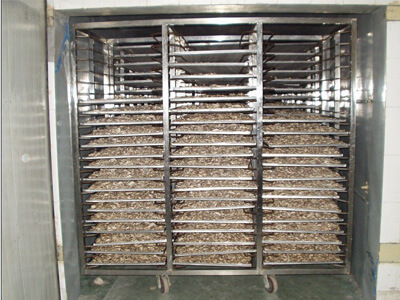 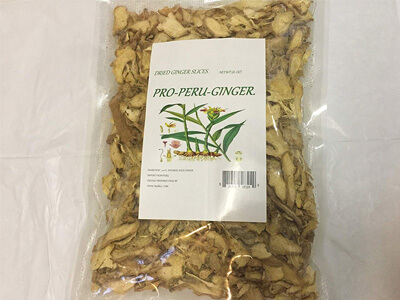 ●Firstly, pick out the broken parts of gingers, then put the fresh ginger on the conveying device, and it is automatically sent into washing tank of Root Vegetable Washing Peeler Machine, which is equipped with automatic spray device to help final washing and peeling.
●Next, peeled ginger is sliced into thin pieces by Ginger Slicing Machine. Before drying, in order to get a brighter colored product, the ginger slices can be blanched by Cooking Blanching Machine, what’s more, blanching can facilitate peeling or kill microbes.
●Then the slices are put on trays of Hot Air Drying Oven for an evenly drying when the slices are spread evenly on the trays, please remember to leave space between the gingers so they’re not touching each other, to allow the hot air to do its job.
●Finally, if you want to further process ginger powder or ginger oil, electric grinder and Oil Extraction Machine can help you achieve these aims.
PS: The ginger powder making process is not difficult to operate, and you can get it even at home. Usually, before grinding into the delicate powder, gingers are dried, cleaned and sorted. Then, the grinding machine can be used to grind ginger paste, through further filtered you can get the pure ginger juice. High efficiency and small size make our mini electric grinder extremely popular for home use.

In modern India, ginger is widely cultivated and marketed as a dried spice, and India has a predominant position in ginger production and exports. In 2014, the total died ginger production is 21858 MT. Indian dry ginger is known in the world market as ‘Cochin Ginger’ (NUGC) & ‘Calicut Ginger’ (NUGK).
● International market
Indian dry gingers are usually exported to the United States, UK, and the Middle East from Cochin,Calicut and other places on Malabar Coast, forming a considerable portion of ginger supply in worldwide, and is reckoned in the London market as next in value to the more carefully prepared, and consequently better looking, Jamaica ginger. Since the commonly employed method in India in the preparation of ginger for the market is crude and imperfect, which means the drying technology is needed in India, such as the practical Hot-Air Drying Method and equipment.
● Domestic market
Ginger is served as a rich appetizer in cooking and an effective drug in local, the clientele in Indian market ranges from multifarious corporations to diverse retailers. Besides dried products, other forms like oils, oleoresins, fresh ginger in brine, pickles, candies, and syrups, powders are also consumed in local.

After ginger ale was invented in the early 1850s, the drink soared in popularity and continues to become the base ingredient of a wealth of cocktails that become classics. Such as the CANADA DRY, which has become a symbol of American culture, is made of ginger syrup(blending ginger with sugar or honey) carbonated water and citric acid. Besides, ginger will be added into a mixed beverage such as Switchel, which farmers drink to quench their thirst on a hot day out in the fields in America. Or added with other botanically-driven flavors like Vanilla Bean, Lavender, Juniper and consumed as sparkling beverages during American people, these sodas are reported with low sugar and healthier than Coke.

The EU market for ginger has benefited from increased awareness and interest in Asian food, and the attribution of various health-giving properties has also no doubt helped. The UK is the major consumer of ginger in the EU. Ginger powder and beverage are the main ginger consumption in the UK. Normally, Jamaica ginger ground is sold about £1 /oz in the UK.
In the future, ginger-derived ingredient (such as ginger powder or oil) will be more popular. For example, ginger is processed as a plant-based ingredient in carbonated soft drinks, around four in 10 adults in Europe express interest in botanical new drinks, with 39% of Spanish consumers, 41% of UK consumers, 43% of French consumers, 45% of German consumers, 48% of Italian consumers and 52% of Polish consumers are interested in buying carbonated soft drinks containing botanical extracts. On the other side, dried ginger powders are used in treating colds and bronchitis, or digestive ailments and nausea, since the gingerols and shogaols of dried ginger has a huge array of phytochemicals. Therefore, drying of ginger needs special attention to preserve the quality in the end product by suitable technique and equipment, the specified drying machine can support you do ginger drying business.