Seafood is any form of sea life regarded as food by humans. Seafood prominently includes fish and shellfish. Shellfish includes various species of mollusks, crustaceans, and echinoderms. Historically, sea mammals such as whales and dolphins have been consumed as food, though that happens to a lesser extent in modern times. Edible sea plants, such as some seaweeds and microalgae, are widely eaten as seafood around the world, especially in Asia. In North America, although not generally in the United Kingdom, the term “seafood” is extended to freshwater organisms eaten by humans, so all edible aquatic life may be referred to as seafood. Seafood is often distinguished from meat, although it is still animal and is excluded in a strict vegetarian diet. Seafood is an important source of protein in many diets around the world, especially in coastal areas.

The required processing technology already exists to successfully convert the thousands of metric tons of bycatch that is annually dumped by trawlers and longline operations into marketable dried products that will be consumed by the world’s growing population. As we move toward full utilization, it is essential that we develop markets and product forms that will not just politically resolve the bycatch problem but will also economically achieve the goal of full utilization. So economically viable dried seafood product forms for seafood are necessary.

Hot air drying is used primarily in the more expensive snack seafood products. Commodity products are also primarily air dried, but they also can be sun-dried in certain climates. Many of the observed dryers are batch-type dryers, for example, the Chinese seafood dryers have numerous doors so that carts could be moved in and out of the dryer. Also, in China, it is very popular to roast fish species after drying them. This gives a color effect, softens the fish, and imparts a flavor. Many dried seafood used for snack food is immediately tenderized after being roasted. This tenderizing step softens the hard surface of the fish and further breaks down the proteins. 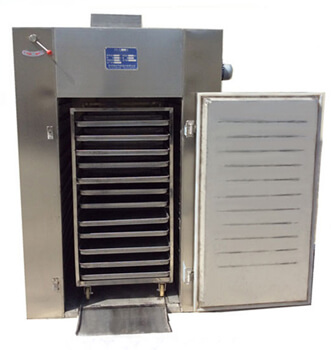 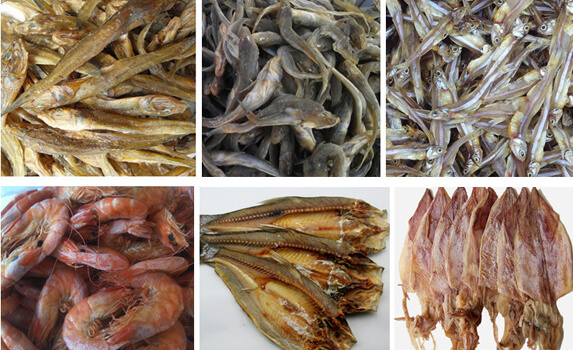 Another modern efficient seafood drying method is microwave drying. Microwave drying technology is ideal for seafood, e.g. little yellow croaker, little fish, marine fish slices, prawn, etc. It can maximally retain the nutritional ingredients and flavors of seafood. Microwave drying is a method of food preservation that works by removing water from the food, which inhibits the growth of microorganisms. Bacteria, yeasts, and molds need the water in the food to grow and drying effectively prevent them from surviving in the food.

Dried Seafood is consumed all over the world, and it provides the world’s prime source of high-quality protein. Over one billion people rely on seafood as their primary source of animal protein. Iceland, Japan, and Portugal are the greatest consumers of seafood per capita in the world. There are many different types of dried seafood available in the UK. In many Asian cultures, it is impolite to not have snack dried seafood served to guests or patrons. Small dried fish and seafood are a regular item at many drinking establishments in Japan and Korea.
Many dried seafood and fish products are consumed in bars as a snack to go along with alcohol consumption. Dried squid and cuttlefish are found in each country in the form of snack food. It is interesting to find regional and seasonal differences in almost all countries. For example, dried skates, are found in China, Singapore, Korea, and Taiwan. It is a “winter” food that is consumed when the weather is colder. This is in part due to the perceived medicinal properties of skate wings. The product is thought to benefits individuals suffering from arthritis and other joint conditions. Many Asian consumers prepare and eat skate wings and steamed the whole skate during the winter to ward off or prevent arthritis. The point to be established here is that there are some forms of dried seafood that are regional.
However, dried products are not always as popular as they used to be and it is very difficult to market such products to consumers who are not familiar with eating them. It is possible, however, to produce some more interesting dried seafood products by the addition of other ingredients to the seafood in the form of a marinade. This marinated raw material can then be dried, for example, in the practical exercises, there is a recipe for fish jerky, which involves the soaking of fish in a marinade of spices and soy sauce, followed by drying.

Dried seafood products are produced and sold in most countries of the world. For example, as early as 1991 the market value of dried fishery products produced in the world was US$ 10.3 Billion, and the world markets exported 505,571mt for an export value of US$ 2.5 Billion. There is a current world demand for dried fishery products that will continue to grow as world population and national economies expand.
Different cost variables are involved and the type of drying processing provides many cost advantages over the traditional freezing of seafood. Drying takes less energy and electricity to process seafood. The final dried seafood product is most commonly shelf stable and requires little or no refrigeration costs to store the product. Furthermore, it is less expensive to transport a dried non-refrigerated fish product than a frozen one. The combination of abundant and underutilized source of raw material help a large potential market for these resources.

The health benefits associated with the consumption of dried fish and other dried seafood is more pronounced and understood in the world. In the countries studied, omega-3 oils are known by their components – DHA and EPA. These components are advertised in all countries. DHA and EPA are linked to brain development and this concept is used as a marketing tool for the promotion of children’s snacks (make your child smart) and for those who are old and concerned about the development of senility. Additionally, dried fish products have been traditional snack foods in Asia long before research was conducted on the health benefits of consuming seafood. Dried shellfish is particularly rich in zinc, which is essential for healthy skin and muscles as well as fertility. Dried whitefish such as haddock and cod are very low in fat and calories which, combined with oily fish rich in Omega-3 such as mackerel, sardines, salmon and trout, can help to protect against coronary heart disease, as well as helping to develop strong bones and teeth.